Donate to our refurbishment fund

We are hugely grateful to everyone who supported our hall refurbishment programme - we could not have done it without you!

Phase 4 (our new kitchen and toilets) were installed during 2016, which completed the planned work which began in 2010.

However there is actually a Phase 5 stage of refurbishment, which was probably not included at the beginning as so much money had to be raised for more essential areas.  We have a large store at the back of the main hall, which will need refurbished when funds allow.  Insulation needs to be installed and the internal walls need to be renewed.  If you would like to donate towards this or give a general donation to Laurencekirk Scout Group please contact us. 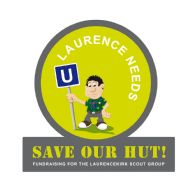 As the state of our Scout Hut was critical, Laurencekirk Scout Group launched an appeal for funds for extensive refurbishment several years ago.

The first stage - replacing rotten timbers and painting the outside - is complete. We also managed to raise a massive £24,000 - and in the process raise the roof! The third phase was the electrics, heating, insulation and ventilation in the main hall. This was completed in October 2013, and phase 4 (kitchen and toilets) was completed 2016.

2016 has been a wonderful year for our appeal.

In March 2016 we were awarded a grant from the Tullo and Twinshiels Windfarms Community Fund which funded our kitchen refurbishment.

During May we received a grant from the Scotmid Community Grant Fund of £300 towards our toilet and cloakroom refurbishment. They also provided us with £200 of fundraising vouchers.

In June 2016 we received a grant of £3000 from the Foyle Foundation, which is a London based charity.  This grant was used towards our toilet and cloakroom area refurbishment.

Our campaign mascot, Laurence, is a Cub Scout. He reminds us that, although we are raising money for a building, it is really about giving children and young people the chance to experience the big adventure of Scouting.

The existing hut came from Rosemount House Estate at Hillside. It had been used for Polish soldiers and German prisoners of war during the second world war, and is now well past its sell-by date. The group has had the site in Charter Avenue since 1954. It was donated by a local landowner for as long as the group continued to use it for the purposes of Scouting.

Please get in touch if you represent a community group who would be interested in using the refurbished facility.